Hippy Tree:
OMG, after looking at this old picture I spotted the "Hippy Tree"
There was a picnic table under this tree, and if you were cool, and hip, you sat there. I remember playing my guitar and everyone loving it and we use to play our portable record players, holding hands, lol sometimes sneaking a kiss or two. We were the closest thing to a hippy who was there in the late 1960's. Now we can put this to rest, the Hippy Tree has been found.
Note the sidewalk, next to Hippy Tree, under this sidewalk was the "Tunnel". In the winter snow was always melted from the sidewalk due to the hot steam in the tunnel 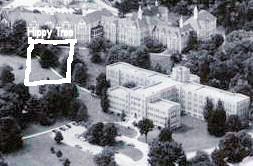 Oh yes, "The Iron Lung", now that was scary looking stuff. Especially when you didn't know what it was, you could only imagine.

This morning I was googling Hippy Tree at TCSH, and I had a big laugh.
Some ghost hunters claim near the hippy tree is a doorway to hell and they could hear voices coming from near the tree.
If they are hearing voices than they better get some help. Their are Doctors who specialize in this kind of illness. lol
I just hate all of these third party accounts.
These Kind Of Accounts Are Pure Rubbish!

ronl wrote:This morning I was googling Hippy Tree at TCSH, and I had a big laugh.
Some ghost hunters claim near the hippy tree is a doorway to hell and they could hear voices coming from near the tree.
If they are hearing voices than they better get some help. Their are Doctors who specialize in this kind of illness. lol
I just hate all of these third party accounts.
These Kind Of Accounts Are Pure Rubbish!


Yesterday I found a thread (from the link "okie" posted) where people are arguing about the tunnels. Some are saying that the tunnels lead to places under Traverse City. They sound like they're "stuck on stupid"

Ron, about the "tunnel thread" I posted earlier.
There was one person who posted a very accurate description on the tunnels.
So accurate, that it could have only come from someone who spent time there. So I e-mailed him.
I receved a reply form him this morning.
Come to find out, he's the son of a "Dr. Pearson". who worked there from 65 to 72. The family live on the grounds across from the Chapel.
Hopfully he'll be posting soon.

I am moving into a new web server and over the next few days my web sites and pictures will not be available from time to time. This is a heads up. As to the tunnels I can recall very much about them.
.
The Tunnel:
The tunnel was a big tunnel which ran from the Canteen, Building 50 in the center to the administration building, than on to the theater. Their were side tunnels too which ran off of them, these were always locked. All the steam pipes and electrical was run through it. It was always hot in there. During the winter all the snow would be melted from it, and a sidewalk was placed on top of it. I always enjoyed my 1000 trips through it. There were tunnels which ran to the cottages and other buildings, these were not really walkways, like the big tunnel.
This tunnel was about 8 feet by 8 feet and one side was a big shelf about 4 feet off the floor 2 feet deep and the big piped were suspended from the ceiling in that area, many of these pipes were covered in asbestos, lol. I recall getting cramps in my legs from walking uphill in the big tunnel. I remember how ot is was in them, I use to sweat in the winter in them.

The Traverse City Zoo was such a nice place to go by West Bay. Used to love to feed the deer. It felt good to feed them since they were always so eager to get the food from me. Did you ever ride the train? Always made me feel like such a big person. It is a shame that they tore the zoo down. It wasn't much but it was nice to go and have fun at.

It is sad to hear they tore it down. I do remember the train, I was too big for it, lol The zoo was one of the nice things.
Thanks for the info.
I do remember the Cherry festival in July, do they still have it?

click image for a full-sized view
Welcome to Memory Lane,

ronl wrote:It is sad to hear they tore it down. I do remember the train, I was too big for it, lol The zoo was one of the nice things.
Thanks for the info.
I do remember the Cherry festival in July, do they still have it?

The zoo was fun even when I was in high school. Yeah TC still has the Cherry Festival the first week of July. I was on one of the floats, 1967 I think, for grade school. The festival is even bigger now. I never really got into it. The Blue Angels have flown over West Bay by where the zoo was for the Festival and that was cool. This year the cherries were not ready at the time of the festival and they were shipped in from somewhere. The tourists coming to the festival have fallen but that is expected with the economy as it is. Michigan hit 15.1% unemployment!!!!

click image for a full-sized view
Welcome to Memory Lane,

If you read the entire story, you will see that maybe in 1967 I helped make a float for the cherry festival, I remember it having red and blue streamer's on it and I think flowers on the upper part.
I did not get to see it in the parade. We never went to any parades.
.
I recall the state fair in August north of town across the street from the bay, East bay??
.
I also remember the long ride up the peninsula to the light house. Up one side of west bay and the return trip was along east bay.
.
In the summer our school took us on field trips and one place we went swimming at was Long lake, there was this little park and I remember a small store there and in the water was a raft, we use to dive from. Does this ring a bell?
.
Another place we use to go was a big fenced in park north of TC along Lake Michigan, it was real rocky in the water and the water was always cold. One time a long hair band came and played for us, and I remember this guy allowing me to play his Gibson SG guitar, and he had a fuzz box, this was the first time I played either one, I will never forget that. This park had covered areas with picnic tables.
.
We use to go to Interlacken Music camp and spend the day at their beach on the little lake and use their big party room at the beach area too.
I recall walking out of this room/hall down the concrete steps and their beach started at that point.
.
And who can forget Sleeping Bear Dunes and lake Michigan over that big hill. and sand lake across from the parking lot. I recall sand in my hair, ears, belly button, lol for a week.
.
Other times when the weather was bad we would drive all over Michigan in that big yellow bus, with Traverse City State Hospital on the side, lol.
They never let us forget where we were from. And we really stood out in public.
We could only be in the sun for 30 minutes at a time, than we had to put our shirts and pants on, this was because of the meds we were on. It was the sunburn factor.
We also was always in the shade as much as possible.

Some ghost hunters claim near the hippy tree is a doorway to hell and they could hear voices coming from the ground near the tree.


After giving this some thought I think I can explain.
The big tunnel was about 6-8 feet away from the hippy tree, right under the sidewalk, and if someone was in the big tunnel talking, and you were by the tree, I would guess it may sound like voices coming from the ground, and voices in the tunnel echoed, the sidewalk and ground would muffle the sound and change its tone and pitch depending on where the person in the big tunnel was when he was talking and which direction this person was walking, so maybe it would sound like voices from hell. LOL
Hippy Tree

There were escape doors all through the tunnel in case it caved in or flooded.